Posted at 13:44h in Uncategorized by Jason Linscott 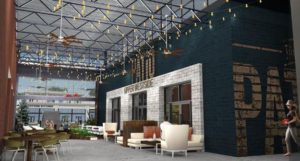 The 100,000-square-foot project is now under construction on a nearly 10-acre site along Marietta Boulevard, across from a new Publix store and Henri’s Bakery & Cafe at Moores Mill Road.

What sets the development apart from most shopping centers is its almost 17,000 square feet of outdoor patios and communal space, including sunken seating areas, rooftop terraces and courtyards.

“I became a believer instantaneously when I saw Eden Rock’s vision and toured this submarket,” said Buonanotte, who along with Stein, was behind Westside Ironworks, an adaptive reuse project on Howell Mill Road that includes Barcelona Wine Bar and O-Ku Sushi. “We want to be more than a shopping center. We want people to come together and congregate with their neighbors. I think it’s crucial.”

That’s because in an age where e-commerce is forcing retail to evolve, shopping centers that offer an elevated experience for consumers are quickly becoming social destinations. Consider Ponce City Market or Alpharetta’s Avalon.

“It creates an environment where you want to stay,” Ashkouti said. “We are checking so many boxes for local consumers.”

He said the project is coming to an area with the state’s highest annual household income. It sits between established neighborhoods including Peachtree Battle and West Wesley and a cluster of new home construction that’s bringing thousands of Millennial families. About 1,700 new homes are under construction within a half-mile of the project.

“This is a retail-starved market with incredible disposable income” Ashkouti said. “But right now they have to drive 20 minutes for dining options and daily-needs retail.”

When complete, the project will also offer several restaurants, a coffee shop, gourmet market with prepared foods, ice cream shop, yoga studio, dental and medical services, along with daily needs such as a dry cleaner, salon and hardware store.

The project is re-purposing a 50,000-square-foot warehouse and adding three commercial buildings. It will also include about 20 townhomes.